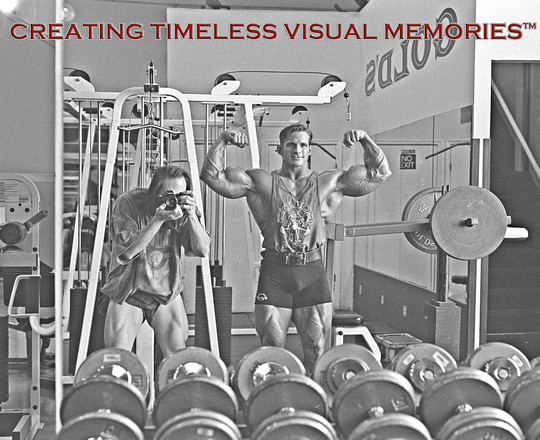 Since 1988, Jason Mathas has been a professional photographer, specializing in the bodybuilding and fitness industries. JMI-Jason Mathas Imaging is the culmination of 25 years of Creating Timeless Visual Memories.™ This is a living/evolving site which will incorporate material shot during the last quarter century as well as a constant influx of new images. Bodybuilding/Fitness has been the core and will continue, but JMI is expanding into numerous other photography genres.

In the above photo, Jason Mathas flexes the wheels while photographing Darin Lannaghan at Gold’s Gym (Venice, California) in December 1994. This section of the gym was known as the “Miracle Mirror” because of the flattering lighting conditions. Everyone, from top pros to “wannabes”, commonly checked their condition right here. Jason elaborates, “Darin definitely would have become a pro, had he continued in the sport, and I was the prototypical wannabe. So we had the full range of Miracle Mirror participants for this photo. But Lannaghan's arms were really something special. Until Roelly Winklaar ruined the curve for everyone, I felt Darin had the best combination of biceps, triceps and forearms I’d ever seen.” This photo was taken so long ago, Jason had hair and used a manual focus film camera.
©JasonMathas.com, ©Jason Mathas 1988-2022
Powered by ZENFOLIO User Agreement
Cancel
Continue